Shetland spaceport gets gov green light for for Lockheed launch

Hundreds of space jobs will be created in Scotland following the government’s approval of plans for Lockheed Martin to transfer its satellite launch operations to Shetland Space Centre.

The spaceport anticipates that by 2024, its site could support a total of 605 jobs in Scotland, including 140 locally and 210 across the wider Shetland region. A further 150 jobs will also be created through wider manufacturing and support services.

Following a thorough process of due diligence, the UK Space Agency confirmed that Lockheed Martin’s plans to move its UK Pathfinder Launch to the Shetland site at Lamba Ness on Unst would continue to deliver long-term value and help establish a sustainable, commercial launch market as part of the UK’s spaceflight programme – LaunchUK.

Lockheed Martin is in discussions with a preferred partner to provide launch services for its UK Pathfinder Launch.

Science minister Amanda Solloway said: “We want the UK to be the best place in Europe to launch satellites, attracting innovative businesses from all over the world and creating hundreds of high-skilled jobs.

“The potential to have multiple spaceports in Scotland demonstrates the scale of our ambition, and I want to support industry by pressing ahead with our plans during this challenging time.”

Just as an airport can handle a range of different airlines and aircraft, the Space Hub Sutherland has been designed as a multi-user site able to cater for the needs of multiple launch providers.

The UK Space Agency will also continue to support Space Hub Sutherland through grant funding to Highlands and Islands Enterprise to develop the spaceport infrastructure and to UK-based launch partner, Orbex, to prepare its Prime rocket to launch from the site in 2022.

An economic assessment of the Spaceport Sutherland site reported in 2019 that the site is due to create over 60 high-skilled jobs in Sutherland and Caithness, and 250 jobs in the wider area.

The economic benefits of launch will be shared across the Highlands and Islands region and both Space Hub Sutherland and Shetland Space Centre have already attracted commercial interest in their plans. In 2019, Orbex opened a rocket design and manufacturing facility in Forres, near Inverness, which is anticipated to bring 130 highly-skilled jobs to the region.

Nik Smith, UK country executive at Lockheed Martin, said: “The UK has a vibrant space sector, which can stimulate the national as well as regional economies.

“As a long-standing strategic partner to the UK, Lockheed Martin is committed to building on its proud heritage to support the UK government’s role of growing capabilities in space, exciting imagination and advancing the frontiers of science.”

The ability to launch small satellites for Earth observation and communications will boost UK efforts to tackle these challenges by providing valuable tools and data that can help analyse and predict impacts and support effective decisions and mitigation strategies.

The UK’s spaceflight programme is working with a range of additional partners to establish commercial vertical and horizontal small satellite launch from UK spaceports including Spaceport Cornwall and Virgin Orbit. 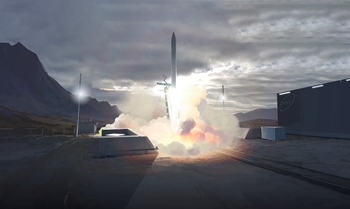 Shetland spaceport gets gov green light for for Lockheed launch